Subscribe to Plymouth's podcast and receive sermons and other special events automatically (this link for iTunes only. If you don't have iTunes, this link might work for you).

(You may also listen to the entire worship service)

Salt is a miraculous substance. It has some interesting properties. It used to be quite rare and expensive in a lot of places, especially in the ancient world. It was not so easy to come by. It was rather expensive. A few years ago I read a book called “Salt” on humanity’s history of our relationship with salt (“Salt: A World History”, by Mark Kurlansky). It is quite interesting how much conflict, war, and political intrigue went on because of our search for salt. Our need for it, wanting access to it (as well as access to other natural resources, and land) drove us to it. But salt? We don’t often think of salt as having been this rare commodity that would have been part of the political process. Now we have found large deposits underground. It is easy to mine, it’s very cheap. I was just reading about a huge deposit that is under all of Michigan state and parts of Wisconsin. We are sitting on a huge salt pile down underground. Billions of tons of salt. I was reading of a big mine by Detroit, where the salt there, after mining, is $15-20 a ton. That’s if you pick it up with your own truck.

But it used to be very expensive. Now fifteen or twenty bucks a ton makes it difficult to imagine a day when people didn’t have shakers and boxes of salt around their homes. Salt was valuable enough that our word “salary” comes from the old Latin word for the Roman soldier’s wages, called “salarium” – salt money. Money for the soldiers to be able to buy salt.

But even beyond its history in human affairs, it’s a miraculous substance because it’s necessary for life. At least for us humans, and most life forms I know of. I can’t speak for all of life, but most needs at least some level of salt, especially the sodium, to survive. It is necessary for life. So for Jesus here to say, “You are the salt” is to be given the status of the miraculous. How does that feel? To think of yourself as part of the miracle?

You are the salt of the earth. Necessary for life.

And yet, too much salt can kill. Certainly high blood pressure is an issue with too much salt. But salt also has the property of drawing out moisture. If you were to encase yourself in salt it would suck all the moisture out of you and kill you. It can be dangerous. Salt can kill bacteria and germs. It preserves food by taking out moisture and thus taking out what the bacteria need to survive. Salt is dangerous, but it is needed.

It is also made of sodium which is explosive in water. It is made of chlorine which is poisonous.

But put the two together into sodium chloride, and it keeps us alive. Something that we all need. It keeps our cells working. It keeps our lives going. Kind of weird, these two dangerous elements – sodium and chlorine – would come together to become something essential for life.

Though I don’t think that is quite what Jesus was talking about. But in Jesus’ time they would have known of two properties of salt, which I think is what Jesus is getting to here.

The first is that you can preserve food by covering it with a lot of salt to draw out the moisture and keep it from spoiling. Salt pork. Salted cod. Hams. Many other foods are salted to preserve them. And that is kind of a Christian thing, isn’t it? To preserve. That’s part of what we do.

Salt is also, when used in the right amount, a flavor enhancer. It makes things taste better. I think that is also what Jesus is getting at here. Make things taste better. Bring out the God-flavors of the world. It makes food taste better. But not by changing its flavor. Salt works with the flavor already inherent in the food to bring it out. To make it stronger, to make it pop, to make it sing. Unless you use too much, then all you taste is salt. But in the right amount it draws out the flavors already there. You are all good cooks here, and I’m sure you’ve salted a roast or a turkey, or salted your vegetables, or add a little to corn on the cob. There’s a summer thought! Fresh corn on the cob, melted butter, salt... it will come again! Doesn’t feel like it, but in a few months we will have corn on the cob again. A little bit of salt can make the flavors really stand out. It takes the flavor that is already there and gives it more authority. It makes it taste better. Makes it more like it is supposed to taste.

You have probably been at a restaurant, or been in a hospital (where they don’t salt the food), and tasted how unsalted food can be awful bland. Or you have perhaps been to a place where they put too much. That’s also gross, because then all you taste is salt. You can’t taste the food underneath. Just a harsh taste of salt on the tongue. But in the right amount, salt can be a glorious enhancer of what is already there.

And that’s us! We are the salt! God has made us to be salt for the earth. We’re the salt. We’re also the light to take away darkness. The light of grace. The light of love. To be light while we’re being the salt that makes it all taste so much better than any of can be alone. To enhance and to preserve.

So be salt. Be the salt. You are the salt!

There is beauty in this metaphor that Jesus uses. This might even be a command. Not just the statement that we ARE the salt of the earth, but Jesus saying, “YOU are the salt of the earth.” Some of the beauty here is that there isn’t just one function for salt. Salt has a variety of uses. Some salt is used to preserve foods. Some salt is used remove ice from roads and sidewalks. Some salt is used to flavor food. Some salt gets used to soothe. You may have done a salt-water rinse after a root canal or mouth surgery to make it feel better and help to heal. Salt can help to heal a wound. It can be painful, but it does help heal the wounds. It can help with a sore throat. Many ways to be salt.

This weekend is Evolution Weekend, when religious communities around the world are celebrating the intersection of science and faith. Think of all the salt over the years that scientists have been as they have explored the universe and the way that things work, and by showing it to us how the universe works have shown us more about how God works through physics, evolution, chemistry, the history of the earth. Also the engineers that have given us such spectacular and wonderful inventions like iPhones, microwave ovens, and Billy Bass Singing Fish. Waffle irons. Even simple things like steel, nails. Salt of the scientists and inventors. The salt of the doctors that keep us healthy. The salt of our teachers, musicians, actors, writers. The salt of our police and firefighters. The salt of librarians, activists, hospice care givers. The salt of the dreamers and the visionaries who lead us in new directions. And the simple salts of politeness, kindness, generosity, a positive word, an encouragement. All ways to be salt.

So many ways to be salt, and that is what we are called to be. To let our saltiness shine, if you don’t mind me mixing a couple metaphors. Be salt of the earth.

There are so many varieties of salt, just as there are varieties of people. We all have our gifts, talents, passions. Salt, in its processed pure form, tastes the same no matter where it comes from. But in its raw, unprocessed form, salt’s taste is very much dependent on where it comes from. It depends on the earth or water it was taken out of, and how it was taken. Where in the wold it comes from makes a difference because of the other minerals that can be found in it. It’s all salt, but it can taste different. Very much like us. We’re all different. We have our own flavorings. We are all made in God’s image, we’re all human, but we have our own flavor.

On the communion table here are a variety of salts from around the world. Some salt from Japan, France, Maine, Hawaii, and some generic sea salt that I don’t know where it came from that’s been heavily processed. They are in bowls, labeled, and the bowls have spoons. Lynn is going to sing a song, and as she sings I invite you to come forward, if you are comfortable to do so, and taste these salts. Notice that there is a difference in their flavors and how they feel in the mouth. Think of how you can bring your salt in service to Jesus in the many different ways that we can: the salt of our quilters, the salt of our street ministers, the salt of our volunteers, the salt of our teachers, the salt of the folks who come in to shovel and change light bulbs and mow the lawn, the salt of volunteering in organizations around town, the salt of what you do in your jobs. Come and taste the varieties of salt and meditate on how you can bring your salt in service to Jesus. 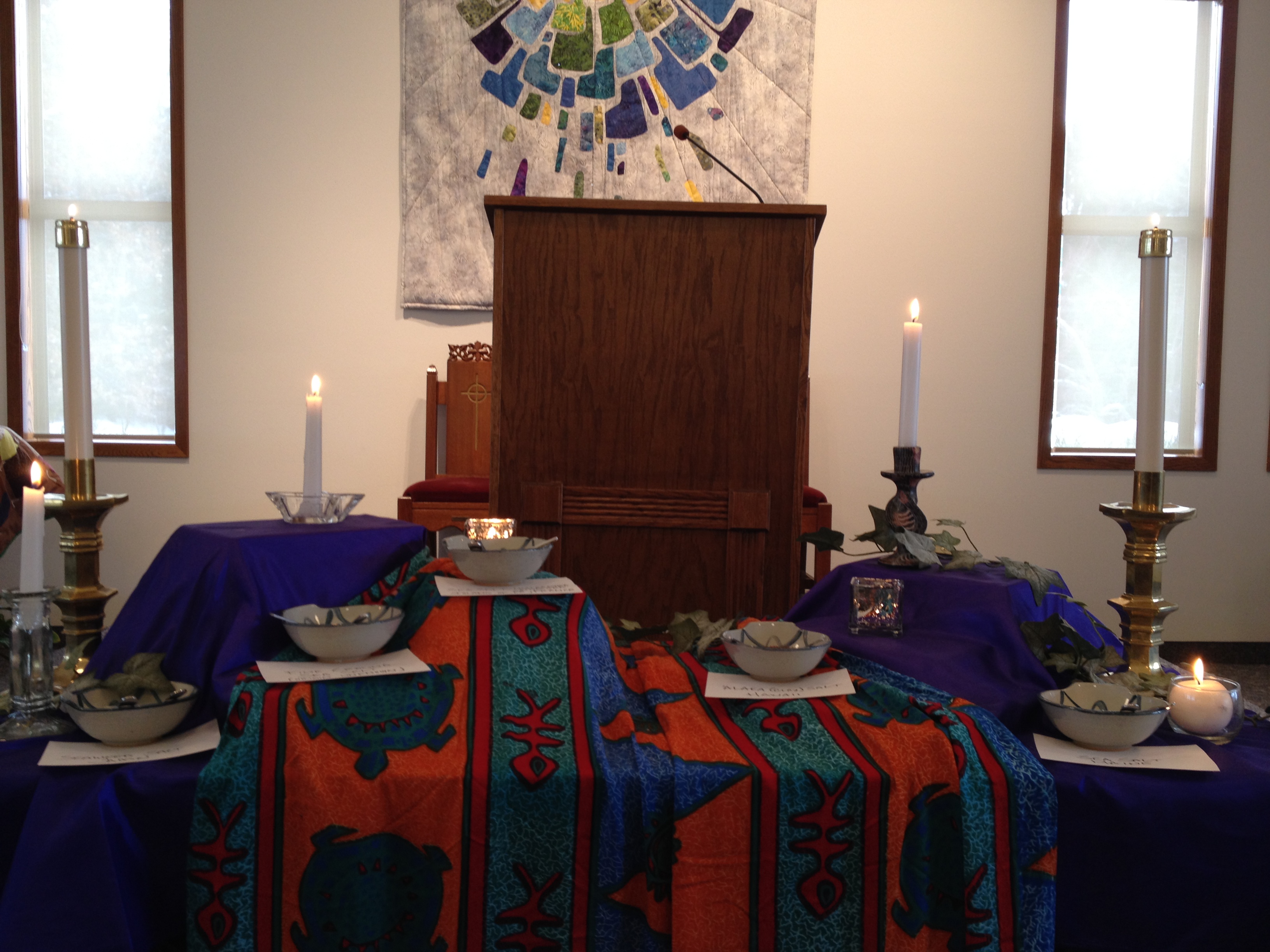 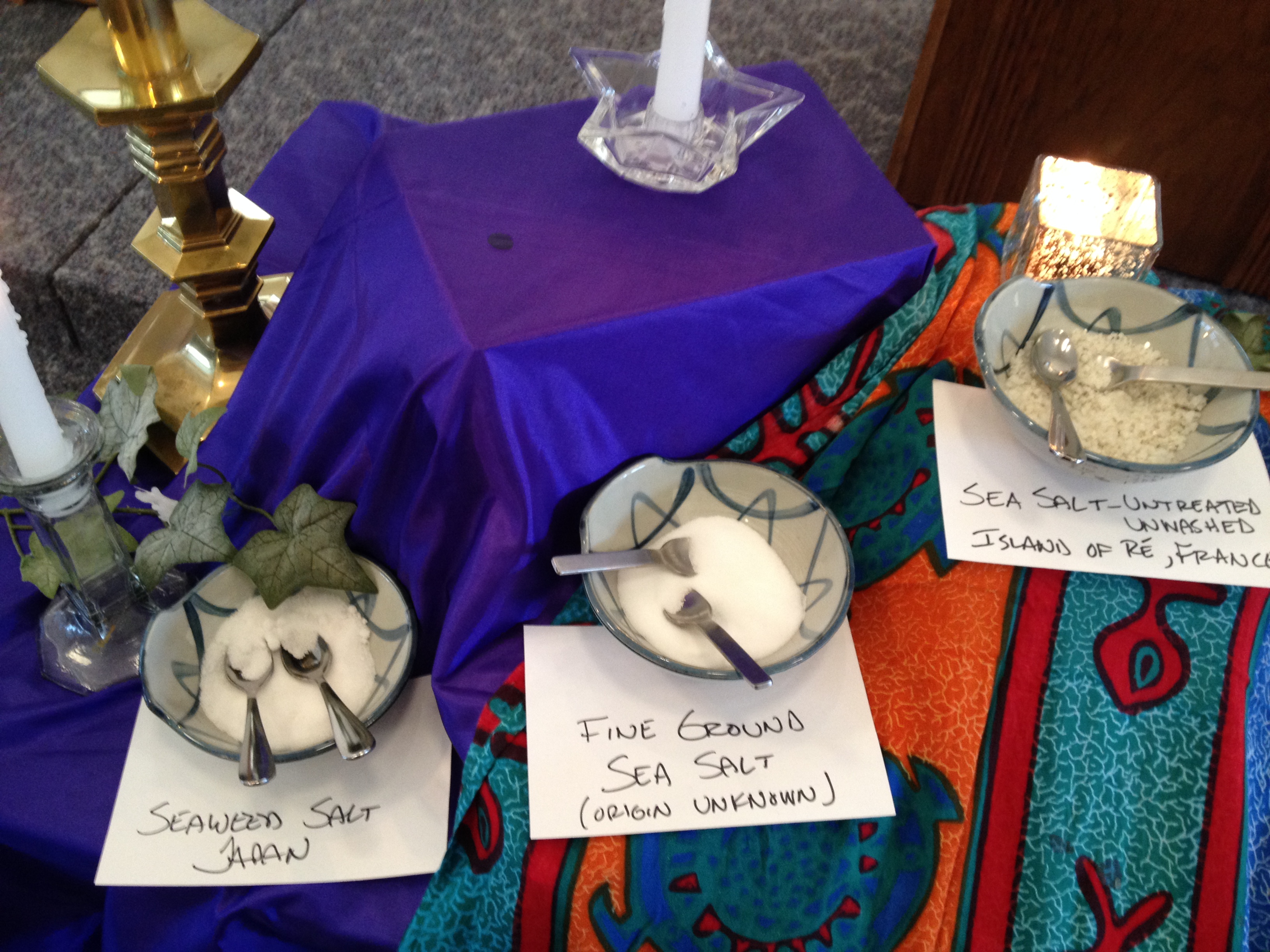 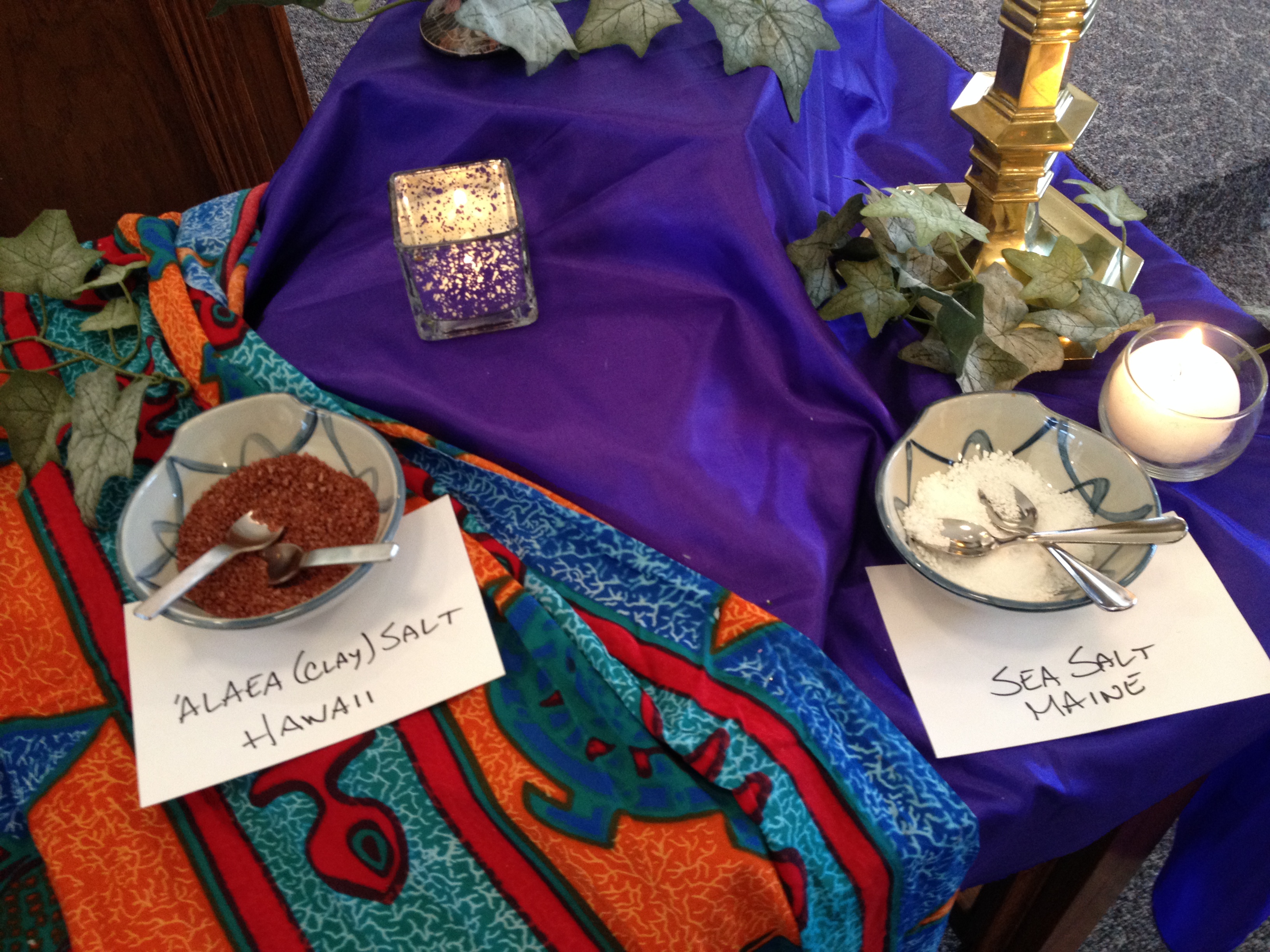